This shirt from ThinkGeek reads: “Johnny was a chemist’s son, but Johnny is no more. What Johnny thought was H2O was H2SO4.”

The science: H2O is, of course, water. H2SO4 is sulfuric acid, a highly corrosive acid. It’s a clear liquid just like water, so it’s no wonder poor Johnny got them mixed up.

Heisenberg and the Cop 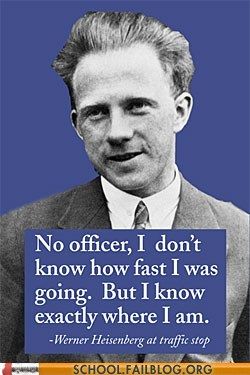 May the Mass Times Acceleration Be With You

This shirt, from Snorg Tees, mixes science with geekery. Chemistry is fun, but this one is more of a play on words. In the periodical table of elements, Sodium is represented by the symbol Na which looks like the word “Nah,” meaning “No.”

I found this Humerus

Another t-shirt, another play on words. The humerus is the long bone in your upper arm, but the word sounds like “humorous,” as in “funny.” So the joke sounds like it says both “I found this humerous (funny),” and “I found this bone.”

If an electron has more positrons than electrons, it has a positive charge. This joke takes advantage of the double meaning of “positive,” meaning both “positive charge” and “are you sure?”.

While it looks like these two carbon elements are out on a date, carbon dating is a method to estimate the age of organic materials.

How it works: plants absorb carbon dioxide. But there are actually two types of carbon: carbon-12 and carbon-14 . Carbon-12 is ordinary, stable carbon. Carbon-14 has two extra neutrons and is a bit unstable. Eventually, carbon-14 will lose those two extra neutrons and become carbon-12. The rate that carbon-14 loses half its neutrons is called a half life. It’s a constant, predicatable time frame (5,740 years for carbon) and so can be used to estimate the age of organic materials like the Dead Sea Scrolls.

This joke is twofold: carbon dating can mean “two carbons on a date” or “using the decay of carbon to determine the date of organic materials.” The other line, “where half you been all my life?” sounds like a romantic line, “where have you been all my life?” but also refers to the half life of these carbon-14. All in all, it looks like a rather unstable relationship.

Here’s a final, self-explanatory one for you: 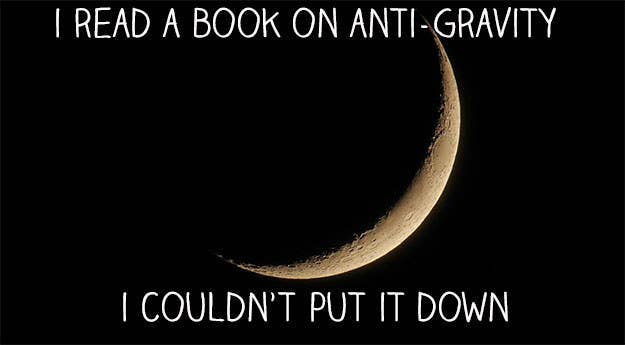